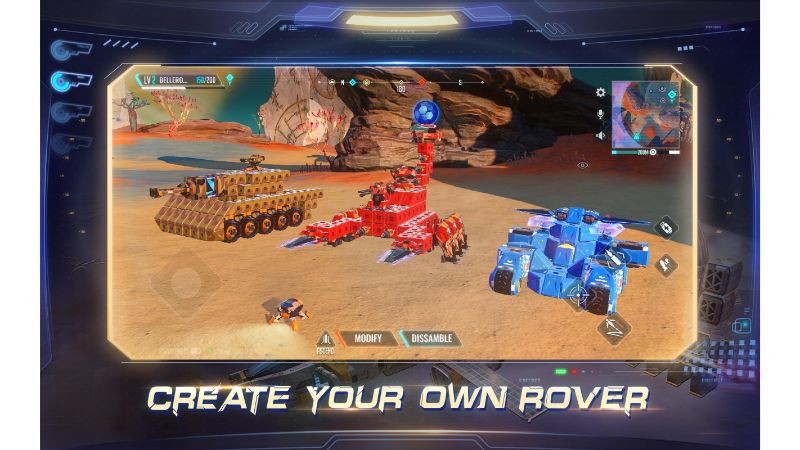 Rover Rage is extremely different from other mobile ages and is developed on a completely different concept. It revolves around building your own rover and use weapons and strategies to destroy your enemies. It is quite challenging to create a powerful robot as well as customize it in order to defeat your enemies.

Rover Rage offers a variety of weapons to use against the enemies based on your rover’s strength, the existing situation and what your enemies are using against you. Here, we have come with some of the most powerful weapons which you can apply to destroy your enemies’ machinery.

Hailstorm Cannon
Do you want to make an extremely powerful defeating strike to your enemy? You must use Hailstorm Cannon, which has high damage as well as a high rate of fire. This weapon is enough to shred your enemy into pieces.

Sniper
Sniper can be used to bring fatal damage from a powerful scope. For this, you have to find a safe place from where you can aim to hit your target. You can also zoom the scope to find your next target.

Magno Launcher
This weapon has the ability to render the special weapons of the enemies close to you. Be close to the enemy as much as possible and hit your target. The choice left for your enemies is to escape from the stage.

Cluster Mortar
Cluster Mortar is powerful to bring severe fire strikes on the stationary enemies. While your rover is moving, the projectile targets a line on the enemy along the direction of the movement.

Minelayer
If you want to set up a trap, this weapon is the best choice for you. It can explode the enemy with the landmines. You need to use some effective tactics to use Minelayer, like discovering the route from where the enemy will pass and all.

Laser-Guided Missile
It is highly capable to control the trajectory of missiles launched by the enemies. It has 1,000 meters range and has up to 10 fight time.

Plasma Blade
Plasma Blade is used by many players as the best shortcut to victory. So, never underestimate the power of this simple and easy to use plasma blade.

Cloaking Device
It is also one of the powerful weapons in Rover Rage that helps your rover to enter the stealth state. When your enemy is not able to see you, simply take advantage of this situation and crush it over.

Holographic Project
It creates a copy of your rover and steals it for a short time. This weapon is used to confuse the enemy, so it is better to create your strategy to use this weapon at the right time.

Next time, make sure to try these weapons in your gameplay.